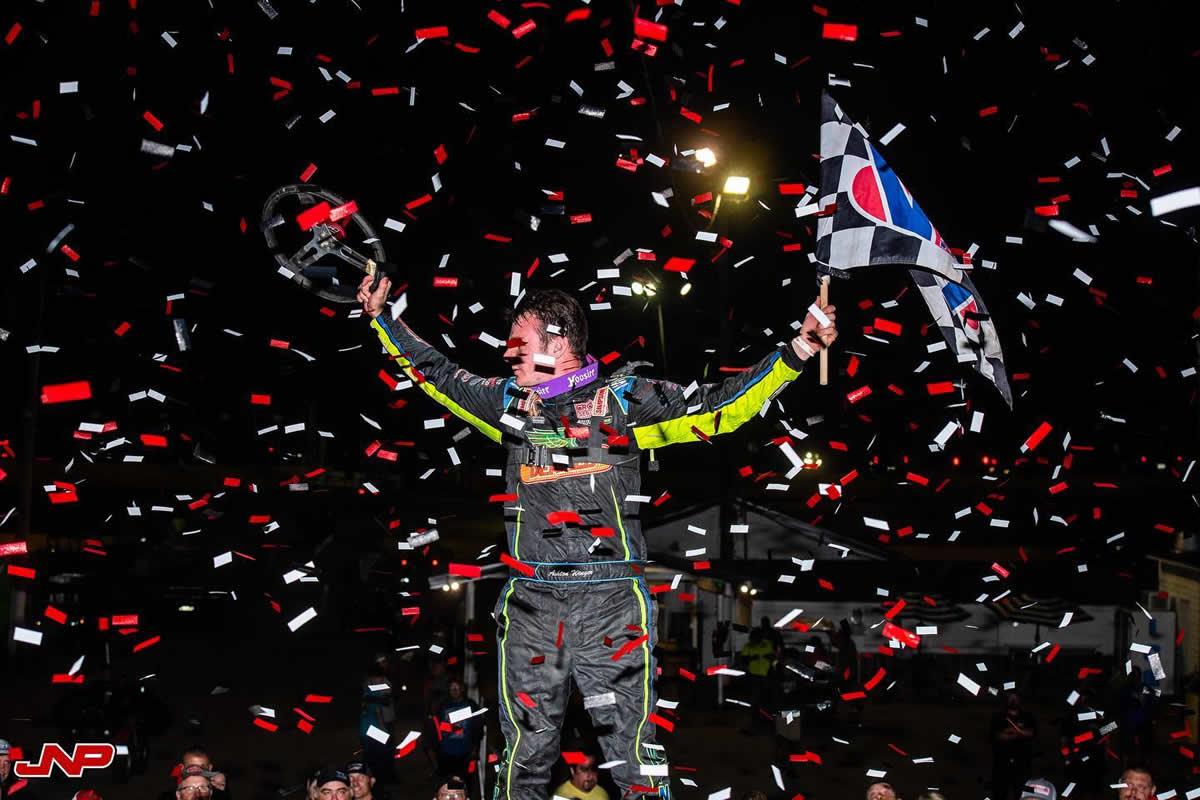 Even under the most challenging of circumstances, Ashton Winger was able to continue his banner 2021 season on Saturday night with a World of Outlaws (WoO) Morton Buildings Late Model Series victory at Senoia Raceway. (Jacy Norgaard photo)

He overcame illness throughout the week as well as a last-minute scramble to get his car ready for action to pick up the $10,000 victory in his E-Z-GO No. 12 Dekalb / Johnny Doan Plumbing/ Keyser Manufacturing/ XR1 Rocket Chassis / Clements Racing Engine Super Late Model.

“This car was in a million pieces yesterday because we had barely done anything because I was sick most of the week,” Winger said in Victory Lane. “Luckily tested negative (for covid on Friday), and we thrashed on this thing all night. Honestly, this morning I wasn’t even gonna race. I was just burned out and couldn’t get things to go the right way. But I’m just super thankful, and I’m really blessed to get to do what I love.”

The win was his third of the year at Senoia Raceway and his 10th overall of the 2021 season.

“It’s cool to be able to race with these guys,” he continued. “They all come out here and they’re pretty good. It’s cool to be competitive with them. That’s all I can ask for is to be competitive, but to run up and down the road with them like I have, I’ve been humbled a lot this year. I made some mistakes, done some dumb stuff, crashed some cars, won some races, had a helluva time, met some awesome people. This is just awesome.”

On Saturday afternoon, Ashton Winger entered his Johnny Doan Plumbing No. 12 Late Model into battle at Senoia (Ga.) Raceway to defend his home turf against a field of 32 World of Outlaws (WoO) Morton Buildings Late Model Series entries. After topping his time trial group, Winger dashed to an eight-lap heat race victory, which promoted him into the redraw.

Receiving the second-starting position for the A-Main, Ashton shot into the lead on the opening circuit and led wire-to-wire in the 40-lapper to capture his third-career WoO triumph and 10th overall win of his 2021 campaign. He took the checkers ahead of Chris Madden, Mark Whitener, Tyler Bruening, and Ricky Weiss to claim $10,000.